I came across this recipe in a recipe leaflet from Lucky's, and since the photo looked so nice and my boyfriend had yet to try out his new waffle iron, I decided to give it a spin. The only waffles I'd ever made before were the Eggos from the frozen aisle, which I had long sworn off. Fortunately, making real waffles from scratch is nearly just as easy! These came out fluffy and sweet - perfect for weekend brunch. I like my waffles a bit crispier though, so next time I'll let them cook for just a tad longer. 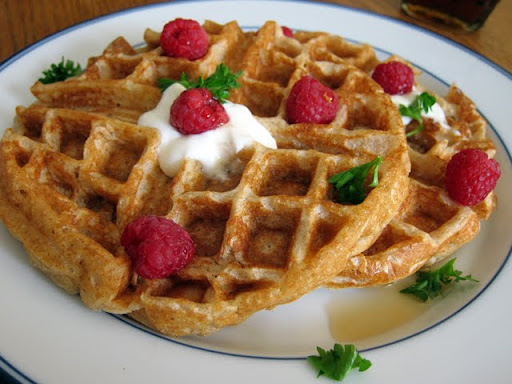 Posted by Anonymous at 10:23 PM No comments:

Lunar New Year for my family is pretty simple. As long as there's chicken, mushrooms, and some kind of soup, we're happy. And the best part is eating at home. Happy Rabbit Year!
Posted by Anonymous at 11:58 PM No comments:

Photos from a recent sushi party that my friends Eugene and Joanie hosted. Super kudos to Eugene for being an awesome sushi chef without a recipe page in sight, and for managing to prepare everything with about 10 people gawking at him and snapping photos.

From the Tokyo Fish Market

And some tender teriyaki beef on the side! Oishii!

Posted by Anonymous at 9:17 PM No comments: